One of the workshops held at the Wild Minds gathering was on Ancestral Movement, as presented by Simon Thakur. Simon’s position on ancestors is the same as mine so I’ll start with why that is so. For both of us, the ancestors are those that went before us, that obeyed their survival instincts and passed on their genes, who carried their way of life along the path of history, who passed on and left us as their descendants. During the workshop, Simon also pointed out that, for people of the land, the actual places where ancestors were buried or burnt would bear traces of their physical bodies. Therefore, it is no metaphor to say that the ancestors are in the land, in the soil, in the vegetation – because they literally are, as compost and recycled nutrients! But like me he goes further to say that the ancestors are not just our own human forebears in the cultural sense, of passing on life lessons and survival skills, and in the physical sense, as they passed on genes and then helped to fertilise the land.

The ancestors are also in the other creatures; and not just because the other creatures eat the grass that grows out of our ancestors’ dead bodies. The other creatures are our ancestors because we have evolved out of the same physical matrix they have; our sun, and our planet earth and moon, all come from the same outrageously explosive conflagration of light that is the starburst behind the entire universe. Amoebic life then emerges out of the melting pot that is the saline solution of the oceans. Unicellular organisms evolve into little creatures with segmented bodies or primitive legs – anything that can move them to better sources of energy, like light or protoplankton. Competition soon emerges amongst predator and prey, even at this basic level. Fish-eyed creatures slop through the mud out of which begin to grow plants. Reptiles grow along their spines and move in waves, like fish but on land. Primates swing from trees and pass fruit from hand to mouth. We modern humans integrate every aspect of this development; growing out of it but retaining it somewhere in our genetic code. And therefore, retaining it in our bodies; and therefore, in our psyches. 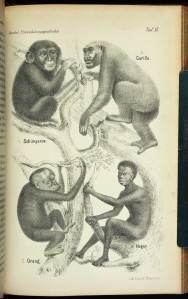 Haeckel wanted to prove black skinned people evolved from the apes – i reckon we should all be allowed to play in the trees!

Moving like each of these creatures reminds us of our ancient kinship with them. And as Simon reminds us, the firing of mirror neurons in our brains means that we sense that kinship in an embodied sense, in the way our thought patterns and bodily movements follow those of other creatures, mostly without us being aware of it. The other day I saw a child struggling to stand from an awkward position on the ground. I felt my whole body feel the child’s struggle – take notice of it in a motivated way – and noticed that my hands had already started to move in a way that could help out. My brain was firing signals of empathy and my body immediately obeyed and sent me to act. Extend this to the other creatures of the earth: moving like a lizard reminds my whole somatic system that those kinds of serpentine waves are part of my own evolutionary biology. Do I then find my empathy for other creatures increases when I remember they are my kin? Do I feel I should help protect their environment as well as mine? Certainly, the least we can say is that forgetting this makes it easier to ignore them and their plight.

Simon doing some animal moves. I’ve been practising them during my rides and walks.

That is the idea behind Ancestral Movement – the rest is in the play! Learning to shimmy across the land like a lizard is a very welcome activity for this embodied ecophilosopher – and is also really hard work! I was exhausted after only an hour of clambering about, watching Simon execute some of the moves I wasn’t ready for, following his explanations of the way each of us as babies experimented with many animal maneuvers as we shifted from supine, to crawling, and then walking human beings. Watching Totem the other night – the latest Cirque du Soleil show – also reminded me of how much fun it can be to explore moving like an animal, as expertly costumed frogs and other amphibians leapt from one bar to another of the turtle shell-shaped frame on stage. Out joints stay open to a wider range in these kinds of movement exercises and that can’t be a bad thing; the lumbar region of my spine slowly soldering together out of misuse is not an attractive option as I get less young. Finally, all of this fun reminds me of a post I once made here, on the importance of walking on uneven ground, instead of always assuming the way we have flattened off the surface of the earth – in the streets and footpaths, inside buildings, almost everywhere we walk in the cities.

*NB: Check out Simon’s YouTube channel if you want to see more of this deadly serious monkeying around (although he admitted he hasn’t loaded up a lot of the animal movement exercises yet, it’s a good start and worth following).

The Compassionate Gardener: a ministry of hope