Why is it so important that we stop the closures of remote Aboriginal Communities? 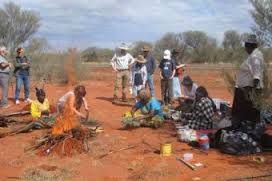 Australian Aboriginal people have given a new meaning to the word “country.” For them, it means a “spiritually enlivened” world, filled with different types of life, each of which has its own intrinsic rights to be there.* Aboriginal connection to country informs a culture with a proven record of sustainable habitation. By building relationships with country – the land, the other creatures, the sea and fresh water bodies, the ancestral spirits that formed these different varieties of life – Aboriginal peoples could remain in conversation with nature. Their place in the world was significant, meaningful; Aboriginal people had responsibilities to country and held it in an attitude of gratitude, for it had given birth to them, the people, just as it had birthed the landforms and other creatures. This is a loving relationship between subjects, or people, of different kinds, all of whom play their part in the biodiverse ecology of any place.

This is the relationship we need to learn from, not break. We should not only be calling to stop the closures of remote Aboriginal Communities; we should be calling on increased funding, which would allow true self-determination, so that Australian Aboriginal and Torres Strait Islander peoples can continue to rebuild their timeless cultures, strengthen their connection with country, and teach us white fellas (or kardiya) the wisdom of their ways. We haven’t done a very good job of this since our own ancestors, the British of the late 18th century, landed here and declared the great southern land Terra Nullius, a Latin expression deriving from Roman law meaning “nobody’s land.” This means they assumed that the new territory had never been subject to the sovereignty of any state, or over which any prior sovereign had relinquished sovereignty. It’s a pretty poor take on the complexity of the Aboriginal people that inhabited the land, the complexity of their political systems and processes, the ingenuity of their technologies and ways of being with country.

But that’s the past. Let’s not repeat it. Further dispossession on the basis of poor economic figures is unfair and unjust. Let’s fix this situation, by asking how the people themselves would like to see it fixed, rather than acting paternalistic – or even worse, acting ruthless – from the governments in the cities. This situation reminds me of the doco shown recently on SBS, Contact. This was the film about how the Murtu people were found living in the area where the rockets from Woomera were going to land in the 60s. Most of the tribe, including all the men, had left the traditional lands (presumably to chase work, though this wasn’t mentioned). A group of around 20 women and children remained and the scientists realized this with little time to go. They raced against time to move the Murtu along, in their trucks, which the children thought were monsters. The group ran away, hiding in caves, asking Yimiri the great ancestral Serpent to protect his people. They asked for a storm to “drive away the devils” who were chasing them; and it worked. A huge storm rolled in, and the rain washed away all their tracks. Ironically, this victory made them impossible to find; and horribly, the British and Australian scientists fired anyway. The rocket failed, however, breaking up in the sky, and falling on some other “unoccupied” land. With a little more time, the white fellas were able to find the group and dispossess them to Jigalong, further south in Western Australia.

This isn’t the time to mention how much such dispossessions have cost all Australians, especially the Aboriginal peoples, in terms of their health and welfare, and their ability to care for country and to pass that knowledge on down the generations. But it does seem a fair time to point out how many natural resources are under the ground in WA; just in case there’s a link between mining futures and clearing the land of its native people.

This has been going on since large-scale civilizations began. It’s time it stopped. There is hope. At the end of Contact, those children, now grandparents, are showing the old film to the new generations; to show the kids their old families, but also to show them the “waterholes, where the stories come from,” so they can help to “keep the law strong.” Let’s help them. See the site at http://www.sosblakaustralia.com/  and show your support on the page at https://www.facebook.com/sosblakaustralia

* See Deborah Bird Rose on this.

Open to those from any discipline, artistic or cultural practice, including analysts & psychotherapists.

A Blog for Self Discovery

can I open my eyes yet?