The Cosmic Walk has amazing similarities with my work and the Ancestral Movements of my last post. While all three approaches embody the same philosophy, the Walk is a song, which relates the path and time scales of evolution, and then has each participant walk the spiral of time from the big bang to now.  As each participant walks the entire history of the cosmos, we all chant along the simple chorus:

“I am as old as the universe, I’ve been here before and I’ll be here again; 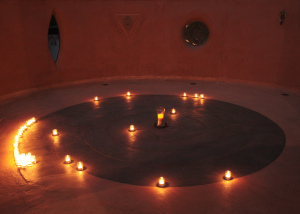 The beautiful brass spiral used for the Cosmic Walk at Moon Court, home to some of the events run by Pagaian Cosmology

The song “Child of the Universe” was written by British singer songwriter Theo Simon in the early 1990s.  It originally had four verses. At some stage John Seed, tireless activist in defence of the earth and developer of the Cosmic Walk concept, heard the song and requested Theo to write an additional two verses to complement the walk as an entire musical experience. The cosmic walk was originally devised by Sister Miriam Therese McGillis of Genesis Farm in New Jersey, a colleague of Thomas Berry (The Great Work) as a symbolic re-enactment that helps us enter personally into the story. Participants walk around a spiral that represents the entire story of the unfolding and gradual differentiation of the Universe and the Earth from the beginning to the present – and to us!

John saw that with additional material, Theo’s song could extend to the epic it now is, ready to carry the whole story of the universe into a performance that can be enjoyed by groups anywhere. You can see John tell this story and sing the song here, at MoonCourt in the Blue Mountains of Australia, which has a brass spiral inlaid in the floor representing the Unfolding Cosmos for the telling of the Universe Story. John had been facilitating an Earth, Spirit, Action workshop during which that story – our Story – was told.

The verses of the version sung at Wild Minds were sung by Helena Read, who herself has performed it on stage with Theo’s original band World Without Walls, unbeknownst by the Triple Ecology gang* who asked her to join them. Synchronicity abounds in this work.

The full lyrics can be heard in some renditions of the song, found here. Theo now performs it with his band Seize the Day along with this extensive repertoire of folk music in the British tradition of social and ecological activism.

You can imagine how the Cosmic Walk is a similar experience to Ancestral Movement, although where that practice literally embodies the animal forms that have been integrated into our physical selves, this one is more in the style of the labyrinth walk. It is an occasion for meditation on the incredible journeys our bodies have undertaken from the bursting forth of the universe to this moment, pregnant with significance. Carried by the crystalline wave of the chant, we walk, sing, hum, and re-place ourselves exactly where we are. Try one as soon as you get, find, or make the chance! 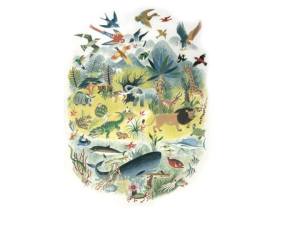 *The Triple Ecology gang (as I have just dubbed them) are holding an event in April (24-26) devoted to sharing the learnings of three frameworks: Sacred, Deep and Healing Ecology.

A Blog for Self Discovery

can I open my eyes yet?